A hundred years, two giants of mathematics debated the role of rigor and intuition in mathematics. While the mighty David Hilbert was praising rigorous foundations for the field, the renowned Henri Poincaré was arguing that mathematics was a matter of intuitions. Who won?

Most would probably answer that Hilbert won, but the answer is far from being that obvious.

Undoubtedly, the discovery of uncountable paradoxes due to self-reference, infinity or probability was a great argument in favor of rigor. Fortunately for us all, all along the 20th century (but mainly around the 1950s), a group of the brightest mathematicians, known as Nicolas Bourbaki, provided a rigorous foundation to mathematics, which solves these paradoxes.

Back in the early 1900s, Russell and Whitehead published the Principia Mathematica and provided a first draft of such a foundation. But it took them 362 pages to finally prove 1+1=2! 362 pages of detailed rigorous but unreadable mathematical construction! Not surprisingly, this wasn’t much of a best-seller, even among mathematicians…

Worse, Gödel proved a second theorem saying that we will never ever prove that Russell and Whitehead’s theory is consistent! Which means that we will forever have to fear an inconsistency in our mathematical theories. And this theorem holds for Bourbaki’s work too…

So there you have it. Today’s mathematics is based on shaky foundations. It is not stricto sensu rigorous.

But there’s worse than that about using rigor rather than intuition! As the example of the Principia Mathematica shows it, if we were to really be rigorous, our mathematics would be written in gigantic unreadable volumes. Worse, just like when we use algebra only, it’s impossible to build complex truly rigorous reasonings.

So, did Poincaré win?

Not really either… If it weren’t for rigor, we wouldn’t have solved all of the paradoxes we used to have! More importantly, we wouldn’t have understood how counter-intuitive mathematics are. Even the simplest concepts of logics have deeply baffled the brightests of us all! Even they need time to really make sense of them. And when it comes to real life, our intuitions can be much more wrong than a chimpanzee’s, as explained by Hans Rosling in a Ted-Talk:

Which leads me to the most important point of this post: rigor deeply improves our intuitions! This is more or less what Fields medal winner Terrence Tao argues, claiming that mathematicians reason in a post-rigorous phase.

The most illustrative example of that is the History of Hilbert’s 16th problem on dynamic systems. The first major theorem regarding this problem was proved in 1923, but the proof was shown to be flawed in 1981! Worse, all along the 20th century, 4 other theorems on this problem were announced, but errors kept being found! Thanks to rigor. Meanwhile, understanding where the flaws occured built better intuitions on this problem, which has led to a new theorem proved by Ilyashenko and Écalle. This one seems to hold. For now…

As you see, the rigor of such proofs is so hard to check that we might say we are still lacking of rigor. Fortunately, new computer-based foundations of mathematics like Coq now enable writing perfectly rigorous computer-checkable proofs. Hopefully, in years to come, we’ll be able to easily use such programs to prove theorems and be sure of their validity. Hence better guiding our intuitions.

One amusing thing that does not appear on the diagram is that intuition is also essential to rigor. More precisely, especially in mathematics, we constantly use our intuition to estimate the necessity of being rigorous.

Note that the only feedback to intuition is through mathematics (or, more generally, rigorous analysis). This is why mathematics is essential in schools, especially mathematical proofs! It’s of the greatest importance to know that nearly all of our reasonings are based on our intuitions, but that, unless trained, these intuitions are often deeply flawed. I believe the role of mathematics in schools to be precisely to use rigor to get intuitions right. Or, at least, less wrong. 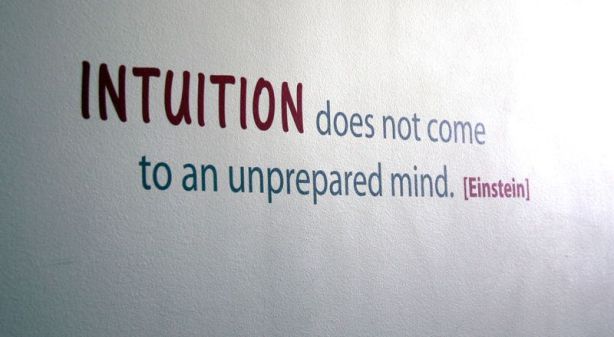